The origins of El Portalón date back to the year 1890. It was established in the old stables of a noble palace from 1850. at number 20 of Banys Nous street.

The street owes its old name to the location of some Medie- val Jewsish baths and follows the layout of the historic wall that defen- ded the city of Barcelona for more than 1,500 years.

It was 1958, a kind of hinge stage in the history of this country that marked the step to moderate developmentalism that characterized the decade of the 60s. Like many other young people in search of new opportunities, Gabriel López Berrón, 22 years of Old and his friend Felix left behind his native Ávila mounted on a Vespa motorcycle and fifteen hundred pesetas in his pocket, according to Gabriel himself. His destiny was Barcelona. In Àvila was waiting for the one that would be his wife Sofía Fernández Martín.

His entrepreneurial and generous character soon gave him an opportunity: a job in a historic establishment of the city. El Portalón where milk and ice were formerly sold to the neighbors of the Gothic quarter, later daring occasionally with humble and homemade meals. There he learned the trade from Avila.

Over time, El Portalón, led by Gabriel and Sofía, was forging a name with its own character.It became a refuge for artists, painters, writers, musicians, sculptors, jewelers and travelers. Creative and restless minds that encouraged the multicultural encounters between people coming from all corners of the country.

Celebrities like the painters Pera Pruna, so acclaimend by Picasso and Manuel Blesa or the musician Miquel Caravalls, were regular visitors. Somenthing to emphasize is how often it was frequented by the Guild of Antique dealers, who made it a reference of the sector in addition to it being their meeting point. It is still being used today by the Penya dels Marayants, a group who rst gathered in the 50's continue meeting in El Portalón.

Only that love and complicity have made it possible for the relay to flow naturally.

The historical context of the beginnings of El Portalón places us in the postwar period. The first dishes that Sofia Fernández started cooking were recipes for spoon. Legumes, on the lentils of Sofia, soon became very popular in the neighborhood. But his home-loving touch soon reflected in other dishes. Grilled sardines, not grilled, following the advice of the writer Josep Plà, were one of the star dishes that arrived a little later but has lasted until today.

In the hands of our and his kitchen team and maintaining the essence that Sofia once impressed in our philosophy of elaboration and product, today is enjoyed in El Portalón a direct and simple kitchen, both in the most recipes Elaborated as those of small format of flavor to sea and earth, with a great respect for the raw material coming from small producers who care for the quality and the flavor like few. At present, to maintain our line of improvement and evolution, our kitchen counts with the expert advice of one of the most recognized Catalan consultants,Francesc Pahissa.

On the other hand, it is worth remembering always the generosity that characterized Gabriel López, who in his day distributed food to the most needy of his environment.

That is why our kitchen collaborates with the Association Units in the program A meal for a meal.

Our establishment has a long and interesting history, somewhat epic. His identity has always been marked by the events that took place between his old walls. Between these walls one has lived very intensely. It was always a very progressive place and advanced to its time.

Going into El Portalón is entering a space where the porrón and the wine were kings. One of its celebrated clients, the painter Pera Pruna, always asked for a porrón Exclaiming: ¡Give this friend a Porró!. And everyone is reminded that Gabriel was greatly concerned about the closure of the artisan factories of porrones, arguing That "porrón is a vital instrument that is not yet suf ciently discovered."

Today, the atmosphere of El Portalón is the fruit of the talent of one of the most recognized and sought after interior designers, decorator of some of the most exquisite houses in Barcelona and the most emblematic spaces: Estrella Salietti. In El Portalón, Estrella has been inspired above all in its past, in its history and has created an updated space, taking advantage of the conserved pieces of different times to form a striking and welcoming environment, while functional. Look at the carpet painted on the floor, remembering old vintage designs. A nod to his final touch. To your personal signature.

There is no end to the art of cooking. There are similar ways of doing things in general, but every chef who appreciates good food will inevitably bring something different to their way of cooking.

The key is in its whole, in its balance, emphasizing its flavor and its smell. Sometimes there are dishes that are not appreciated visually but are a treasure for the sense of smell and taste. A bowl of lentils for example!

In La Barra of El Portalón we remember tradition, we pay homage to the traditional vermouth which was sold in the wine cellar warehouses where the people of the neighborhood enjoyed it religiously on Sundays at noon.

To maintain this custom, we have chosen a classic red vermouth, La Bodega Padrò & CO It dates back to 1886 in Bràfim in the Camp de Tarragona, whose varieties assure us that it goes with any type of "Tapa" and with all recipes from land to sea.

Breakfasts and desserts are also something important for us, that's why we offer you delicious homemade cakes, which you can have with a glass of sweet wine or with a few sips of Garnatxa de l'Empordà of the Masía Pairal Can Carreras. 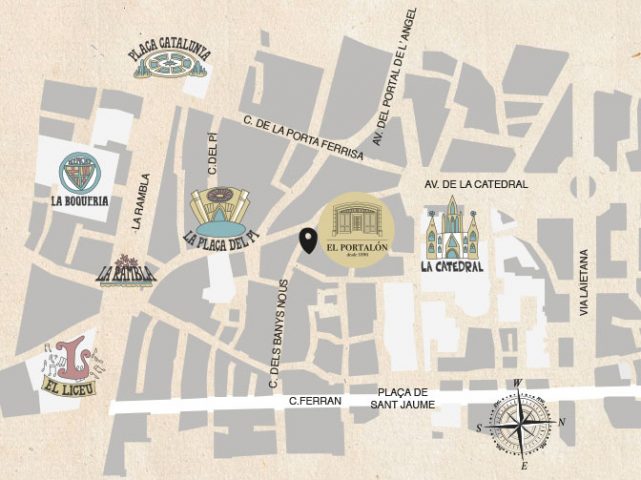 Check our opening times and contact information on EL PORTALON. If you’re planning to bring a group of 12 or more people, please email:
reservas@elportalonbarcelona.com
or contact us by phone +34 933021187

If you have not booked and there is waiting when you arrive, we have the space LA BARRA where you can take a classic red vermouth whose varieties assure us that it goes with any type of “tapa” and with all recipes from land to sea. Or you can have a drink until your table is ready.

We’ll try our best to accommodate any requests made in the booking notes, but unfortunately we can’t guarantee it. If you have a specific request or question, please email to: reservas@elportalonbarcelona.com

Please note that we can only hold your reservation for 15 minutes. Sorry.