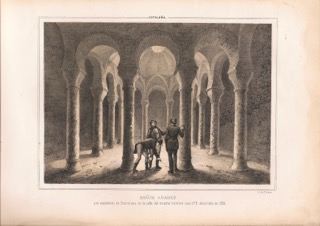 The New Baths of Barcelona were a few medieval public baths located at the confluence of the present streets of La Boquería and Banys Nous, a short distance from El Portalón. Romanesque in style and with an Arab influence, they were used by Christians, Jews and Muslims. They were founded in 1160 and were in use until the end of the 15th century. They were a concession of the Count of Barcelona so no one else could build and operate such an installation. After its disappearance, the building was used as a stable or warehouse until it was demolished in 1834. At present four of its original columns have been preserved and are exhibited in the Museum of History of Barcelona. It is likely that parts of the original construction will be preserved in the foundations of the current building.